Interview with Stefano Jacurti, the most western man in Italy

Stefano Jacurti is the west. He embodies it with his passion, with his plays, with his films and ... with his books! He is a man with a face that cannot be more western, with the determination and the movements that are needed in any role of the frontier. I met Stefano at the dawn of the internet in Italy, when the first themed forums began to be created and among these there were also those dedicated to the west. Since then he has distinguished himself among all for the enormous preparation on the history of the west of the whites and especially on the American Civil War of which he is the undisputed master in our boot.

Between films, books and plays, on the occasion of the release in the bookstore of his latest work "Western cinema and not of 'Bloody' Sam Peckinpah", we were able to stop him for a moment to carry out this small interview in which Stefano Jacurti agrees to talk about Stefano Jacurti and his world which is also ours. 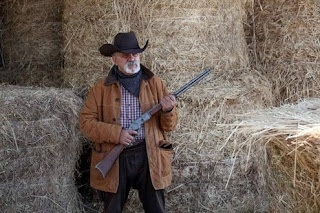 QUESTION: How and when did you start to get passionate about the history of the West in the round? And what about the Civil War that we know is your main passion?

ANSWER: Before it was the cinema since childhood, for the true history of the West around 37 years, while the civil war at 40.

QUESTION: How many books have you published to date?

ANSWER: Compared to those who have published 60, my 6 are few, but they become many if I think that long ago I considered writing a book a deadly bore, then I don't know what happened, I discovered a great passion with my first story inserted in the book "The trunk in the prairie". It was "The Old Man and the Cougar". From that day my journey began and I have never stopped.

QUESTION: Do you also deal with fiction?

ANSWER: Certainly, both novels and short stories set in the savage world of the frontier, although I have written something more modern in the American world.

QUESTION: Which of the books you have written books is most dear to you?

ANSWER: Instinctively I always say the last, rationally the first because it was from that moment that a fuse was lit, but those in between are dear to me as a growth path.

QUESTION: How to frame your latest book in the long thread of your passion for the west and the western?

ANSWER: Like a hole that absolutely needed to be filled. Sam Peckinpah has left an important legacy for many of us in addition to his absolutely innovative and impactful way of shooting westerns.

QUESTION: What are your favorite western writers?

ANSWER: The first one I read was Louis L'Amour. I know many consider it outdated but it has undoubtedly been such a pillar. In today's era certainly Joe R. Lansdale is very important, but the real western writer in my opinion is Cormac McCarthy. There is also Sam Shepard who was really multifaceted in the western genre and its derivatives.

QUESTION: Which films do you prefer?

REPLY: It is true that in the cinema there is also some filth, it is not always wonderful but if I have put the western on the throne it does not mean that I do not like other genres as well. I could talk for hours about "We loved each other so much", "Gangster story" (which Peckinpah liked very much and you understand why) and "On the Golden Lake" film with which Jane Fonda made peace with her father. They are films, just to name a few, that have nothing to do with the western yet I really appreciated them. Among other things, Peckinpah himself has made some excellent films even if they are not real westerns. I could continue with the favor of French cinema that has always fascinated me or with the Italian comedy but we must also look at today's cinema. I really liked Joker for example. Now I understand why he got bad.

ANSWER: How can you not remember Fellini, Visconti, Rossellini, Germi and many others? Germi was a fan of the western even though he never shot any. All of this is perceptible from the films “The journey of hope” and from “Il Ferroviere”. Our Sergio Leone has left a very important and deservedly very cumbersome legacy, perhaps having masters like this in the current era! But it is up to us to find other ways in our own way, according to the canons of the western that has its rules, but also with different times, because today, like it or not, we live at a completely different speed from that of the 60s and 70s Who do we want to talk to others about? Of the glacial Kubrick? Di Cimino? Are Carpenter's masterpieces or the film “The Ruthless” the point of no return of the western? Lots of stuff!

QUESTION: And which actors?

ANSWER: In the western house you can't forget Clint Eastwood and John Wayne for all they have given to the genre, but if I had to mention so many other actors to remember in the western we would be here all night. For the actresses I think that Jill, Claudia Cardinale (who was much more) has not forgotten anyone because it is impossible! I had a soft spot for Candice Bergen in "Blue Soldier" and Annette Bening in "Borderland".

QUESTION: What do you think of Italian westerns (spaghetti westerns)?

ANSWER: I love them, first of all Sergio Leone, but I love about fifty, maybe we get to 60, the most beautiful. How many have been shot? 400? 500? How many are actually the tough ones (who went around the world!) In my opinion are fewer. Personally I am not in line in taste with those who say that even films like "Hey gringo come down from the cross" or "Tomorrow I'll pass to greet your widow word of epidemic" are beautiful. Some are unwatchable. But the others have left their mark even in America as “Django” with Franco Nero, “The great silence and many others among the most beautiful. Tomas Milian's performances in westerns are incredible and the other one is very dear to me, namely Ringo Giuliano Gemma for all those he has shot.

QUESTION: We know that you have always invested time, passion and money in making western shorts… do you think there is a space for them?

ANSWER: We have to look for space but today, compared to past years there is some more chance you see Netflix and the like but even years ago the western paths of the films I had written made a very long journey on the road in Italy for the projections that it was truly amazing!

QUESTION: Do you think the state should support filmmakers more and better?

ANSWER: Exactly, if I had had to wait for the state subsidies of my projects there would have been nothing but pneumatic nothing. Although I am not a producer, my westerns are self-produced when I could.

QUESTION: The next western stop and if there's anyone you'd like to thank.

REPLY: In independent cinema I invite you to follow Emiliano Ferrera's “Black Town”. You know about our previous adventures and how we threw ourselves headlong into the western. Then there was a man and a boy who found in addition to friendship, a perfect understanding when everything was very pioneering. At a certain point it was right that everyone resumed his way to his work. So the years have passed and today there is a man and another who is heading towards old age. But we both realized it's time to relive something beautiful together. In fact, this time the direction is entirely by Emiliano and when he proposed me to participate, I accepted with great enthusiasm, in fact there will be a reunion in Black Town but the film is also something else. It is a short set during the American Civil War with a very original story written by Ferrera. So down with Black Town at festivals! It will be the same for the theater. Next winter I will be on stage with a western by Stefano D'Angelo: “L'Ultima ora” directed by Marco Belocchi. I'm sure we'll see some good ones on stage!

I would like to thank everyone with whom I have shared a show, indie cinema, an evening at the bookstore or a western gathering. Thanks for the emotions experienced together! Thanks to my father who passed on his passion to me by talking to me about Sergio Leone and Silvana Mangano whom he had known very well. But my thanks also extend to my wife Lilly who nicely put on a cavalry uniform to keep me company as General Grant in themed rallies.