Who Are Those Singers & Musicians ~ The COOK & BENJAMIN FRANKLIN GROUP 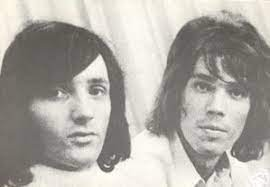 Greenfield & Cook was a singer-songwriter duo from The Hague, The Netherlands, active between 1969 and 1974. Because of their vocal harmonies they were referred to by many as 'the Dutch Simon & Garfunkel', but their sound was, in truth, much more inspired by the breezy sound of The Byrds and other American west coast groups of the era.

Former members of The Hague beat band The Hurricanes, Rink Groenveld and Peter Kok formed their duo in 1967, initially under the moniker Popshop. In 1969 they renamed themselves Greenfield & Cook: half-serious, literal translations of their Dutch family names into English.

They enjoyed some minor success abroad, in Germany and Spain primarily (they recorded Spanish-language versions of some of their singles), and wrote film scores for two Italian movies, 'La Signora è Stata Violentata' and 'Quattro dell'Apocalisse'.

Both Groenveld and Kok embarked on solo careers in 1974, holding on to their 'English' second names: Rink Greenfield and Peter Cook. Their solo activities marked the end of Greenfield & Cook as a duo.