50th anniversary of “They Call Him Veritas”

Today also marks the 50th anniversary of “They Call Him Veritas”. Directed by Luigi Perelli and starring Mark Damon, Pat Nigro Franco Garofalo and Pietro Ceccarelli. The story is about

Story: Veritas (Damon), Jesse (Ceccarelli), Misery (Garofalo) and Chigger (Nigro) who are rascals who live by their wits between Sacramento and San Antonio. Taking advantage of the confusion caused by the Civil War, they wear suitably different uniforms and profess to be heroes. Eventually they wear the wrong uniforms and fall into the hands of southerners, who condemn them to death and then let them free because the war is over. Penniless and clumsy, the four sneak a free meal and some donkeys from the monks of a monastery, then end up in a home as servants of Paquita (Maria D’Incoronato), who knows where a corrupt official has hidden gold. They develop a plan to evade the surveillance of the bodyguards of the military and to rob the latter. They load the gold on a wagon. But when they are about to take flight, are in turn tricked by a mysterious character. Veritas, admires him and asked his name: it is Will James (Guglielmo Spoletini), author of the book "How to get Rich in the West". Given the effectiveness of James, Veritas takes his optimism and instills it in his companions.

They Called Him Verity – Danish title

They Call Him Veritas – English title 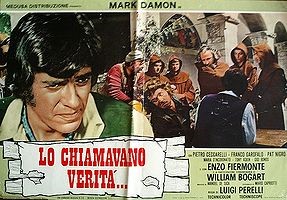