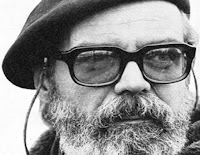 RIP Vatroslav Mimica. Croatian producer, director, writer Vatroslav Mimica died in Zagreb, Croatia on February 15, 2020. He was 97. Mimica was born on June 25, 1923 in Omis, Croatia, Yugoslavia. He studied at the Faculty of Medicine in Zagreb and was a participant in the anti-fascist movement in World War II. He had been working in films since 1950, first as director of Jadran Film, of which he is one of the artists. Croatian cinema will remember him primarily for feature films such as “Prometheus from the Island of Visevica”, the internationally acclaimed “Kai, I'll Kill You”, Monday or Tuesday”, “Event”, “Peasant Revolt” and “Banović Strahinja”.  Mimica co-wrote the story and screenplay for 1957’s short film “Cowboy Jimmy”.
Posted by Tom B. at 6:32 AM