Cardiel and the 'fragatini western', a filmic journey to the 1960s

Between 1965 and 1972, almost 30 films set in the American West were filmed outside Fraga. 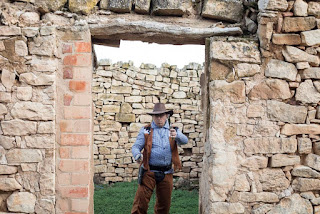 Diego Tejera in the ruins of the fragile town of Cardiel, headquarters of the exteriors of the western spaghetti | Laura Uranga

He lives in Miralsot, a district of Fraga very close to the head of the municipality, and works throughout the area surrounding the capital of Bajo Cinca, but his mind has room for a memory that has already turned half a century, a story of stories that It happened in his childhood and then he has analyzed in detail. The director and photographer Diego Tejera is the largest Aragonese authority in the world of 'spaghetti western' and one of the most experienced voices in Spain in the analysis of that flow of films shot between Spain and Italy in the 1960s and early 1970, more than 500 movies; almost 30 of them shot outdoors in this area of ​​Aragon, on stages scattered around Chalamera, Alcolea de Cinca, Ballobar and, above all, the town of Cardiel, 12 kilometers from Fraga in the direction of Zaragoza, very close to the highway and the plot where the Monegros Desert electronic music festival will take place again this summer, with a worldwide impact; a creation, by the way, of the fragile saga of the Arnau. 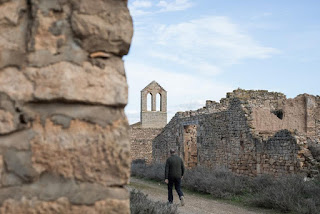 Diego is a collector of films, posters and abundant documentation about the period in which the studies of the Balcázar brothers, allied with the director and screenwriter Ignacio F. Iquino, made two dozen western movies between the town of Esplugues de Llobregat - where the archetypal elements of these tapes were, such as the 'saloon', the jail, the shop or the water trough - and the Cardinal fragatino, where other outdoor scenes were filmed. The action was limited to the period between 1965 and 1972. “Eight years ago we set up the traveling exhibition 'Fraga City, city without law', focused on these films. There they talked about the directors, filming and stars like the Aragonese Fernando Sancho or Dean Reed, the Red Elvis, artist and activist; his own life he took before for a movie was about to be made. He diedd in Berlin in 1986.”

Diego has agreed to visit the town of Cardiel with a bit of characterization; a vest, ammo belt, boots, two very successful toy guns and a cowboy hat. “The houses of the town are private, but the town hall has set up a booth and bathrooms for attendees on specific visits; there is a party here during the year, and also Starlight activities; Given the zero light pollution, it is a perfect place to see the stars. I think the place could be an unquestionable tourist attraction with a little conditioning.”

Diego talks about a couple of interesting projects at hand. “Paco Spain made a book about the town of the Balcázar in Esplugues, and its collaborator Javier Ramos has just released one on which the Community of Madrid once housed; This space has been partially rehabilitated, naming old streets with movie titles, and the project was presented a few days ago in Fitur, with the idea of ​​setting up a tourism project. Javier is now coming to Fraga to talk to me about a book about the town of Cardiel and those films, and I would love to talk with the institutions later to see if we can sketch an idea similar to that of Madrid in Fraga.There are boys from the area who want to make a short film here; Recently a documentary was made on the subject, Catalan students who did it as a final project, spoke with directors of that time in various parts of Spain and abroad”.
The Catalan documentary 'Goodbye Ringo', by Pere Marzo, echoed the 'Spaghetti western' of the Balcázars and their Aragonese stages. Diego wants to make a short film about it. “And using Super 8 makes me look forward to that vintage touch that gives filming. I worked on TVE 16 mm, an experience. I would also like to organize projections here, perhaps with a translucent tent and images from the outside inside, to recreate a duel in the sun inside ... or make cinema with pianist and plays of light and shadow: there are many possibilities. There is an Almeria company, Niño Leone, specialized in exhibitions and thematic activities, that is interested in doing things here; They have asked me for advice. There are many more fans of this cinema than I thought.”

The first is he, of course; his son, who already works in the sector with his father, is not lagging behind. At the moment it is Diego, gun replicas in the belt, who stays alert while walking between the streets of Cardiel. Just in case. 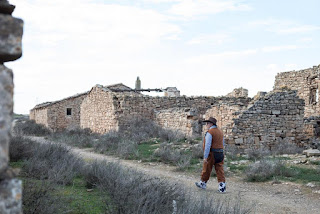 Vivid memories in Fraga and the future that can be built

Cinema and music are two elements of weight when feeding the cultural impulses in Fraga. In the case of the 'Spaghetti western', the plans of the mentioned Balcázar brothers went beyond having Cardiel as a secondary headquarters; They planned to bring their full studio from Esplugues de Llobregat to the Monegros, although that idea did not finally crystallize. The difficulties derived from his incessant activity and the poor commercial result of many of those films resulted in a unique curtain: the last film of the genre shot by the Balcázars, "Now They Call Him Sacramento" used
images of the burning and demolition of the town of Esplugues .

Of the films filmed in Fraga highlighted 'Gunmen of Arizona' (1965), 'A Pistol for Ringo' (1965) and 'The Return of Ringo' (1966), in addition to 'Yankee', also from 1966, directed by the Italian Tinto Brass The transalpine filmmaker has gone down in the history of cinema as an erotoman: he also did 'Caligula', 'Cosi Fan Tutte' or 'The Brothels of Paprika'. "There were names that were repeated, such as Giuliano Gemma or director Duccio Tessari, but on other occasions the actors changed their names and filmed several films in the same month," says Diego.

In addition to the Diego Tejera sample, in 2012 the show 'Adiós Amigo', by Valencian photographer Sergio Belinchón, produced by the Provincial Council of Huesca, also stood out in Fraga. Now, Diego plans to recover that exhibition, with added findings, and take it to new scenarios. In addition, he welcomes other good news; the possibility of Fraga's Florida cinema returning to activity. “It is owned by the Arnau family, it has been an emblem of the city and now it seems that an agreement has been reached with the City Council to return to the activity; It is in a perfect place, it has a lot of tradition, a good capacity ... it will give a great service to Fraga, which with 15,000 inhabitants must have a cinema; localities with 15 or 20 times less population like Mequinenza or Candasnos have them, and are a very beautiful addition. I have spoken with the Candasnos Film Association, to present my short film there if I can get it finished. That cinema has a special charm, it reminds me a bit of the 'Cinema Paradiso', saving distances. I identify a little - laughs - with the main character, Toto.