We continue our search for filming locations for “Day of Anger”. Jack goes outside and tells his men to go and wait for Talby at Bill Farrows place. They ride off and Talby leaves the saloon telling Wild he wants the names of the men in Clifton. Jack tells him, Turner the banker, Judge Cutcher, Abel Murray and Bill Farrow. As Talby moves toward his horse Jack fires his pistol at him but misses. Talby returns fire and hits Jack in the chest and down he falls. Scott comes out and sees Jack on the ground begging Talby not to kill him. Scott jumps in the way and tells Talby he can’t kill Jack. Talby drops down and shoots and kills Jack with a shot between Scott’s leg. Jack’s holding a cocked pistol in his hand which he was going to shoot Talby with. Talby mounts his horse and says 5th lesson, “You wound a man you better kill him or sooner or later he’s going to kill you.” He then slowly rides out of town. 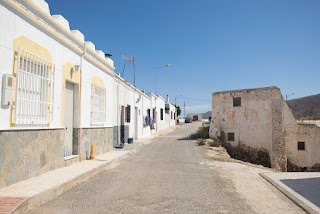 This scene was filmed a Los Albaricoques, Spain. The same location seen in “Fistful of Dollars” and “For a Few Dollars More”. 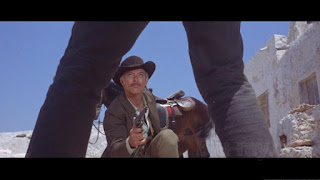