We continue our search for filming locations for “Day of Anger” Talby arrives in the Mexican village of Bowie and slowly rides the street until he comes to a saloon where he dismounts and ties his horse to a hitching post. Talby enters the saloon where a half dozen undesirables are drinking. He goes to the bar and is given a drink of Tequila. He tells the bartender to tell Wild Jack that he’s here and when he mentions his name the bartender’s eye grow big in recognition. The bartender looks for approval at one of the men who nods his head yes. When he leaves Scott Mary arrives leading his mule. Talby is shown sitting at a table smoking his pipe when Scott walks into the saloon. Talby tells him third lesson, “Never get between a gun and its target”. Scott sits down at another table and Wild Jack enters. Talby tells Jack he wants his $50,000 but Jack says he doesn’t have a dollar of it and just got out of jail 3 weeks ago. Talby says he knows and he’s been waiting 10 years to give him the bill. Jack explains he pulled a bank job in Abilene with the help of certain people from Clifton for 50% of the take, the banker, the judge and other leading citizens but they testified against Jack and went to prison. Talby tells Jack to go to Clifton take his revenge and get the money and pay him off. Jack said he has a price on his head and they are looking for him all over Arizona. Talby tells Jack to give him the names of the people in Clifton and he’ll collect the debt. Jack agrees and orders drinks for all but Talby refuses and so does Scott. Jack beats up Scott Talby stops the beating and Jack and his men leave the saloon. He tells Scott lesson 4) “Punches are like bullets. If you don’t make the first one count you just might be finished.” 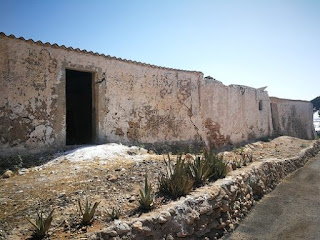 This scene was filmed at Los Albaricoques, Spain. The same location seen in “Fistful of Dollars” and “For a Few Dollars More”.

For a more detailed view of this site and other Spaghetti Western locations please visit my friend Yoshi Yasuda’s location site: http://y-yasuda.net/film-location.htm and Captain Douglas Film Locations http://www.western-locations-spain.com/
Posted by Tom B. at 6:15 AM