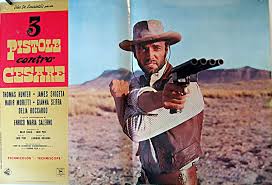 We all laughed at the absurd gun Thomas Hunter as Whity Selby used in 1967’s “Death Walks in Laredo” but such a gun actually existed in the Wild West. It was called a Duck’s Foot Pistol. It was classified as a hand-held volley gun a pistol with multiple barrels arranged in a splayed pattern, so that the firer could spray a sizable area with a single shot The principle behind this type of pistol is one of confrontation by one person against a group; hence, it was popular among bank guards, prison wardens and sea captains in the early 19th century. 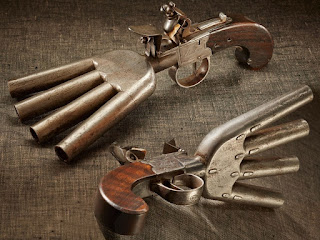