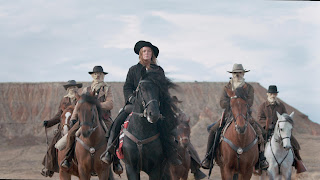 When the American Civil War breaks out, a family of french settlers must abandon their Missouri home to flee and go back to Paris. Edmond, the patriarch, is accompanied by his wife Madeleine, their maid Layla and their three daughters: Esther, Justine and Abigaelle. Esther, the youngest, is irresistibly attracted to Victor, a former mercenary who's escorting them. This relationship soon acts like a poison within the group of travelers, especially when Victor's past is catching up with him.

David Perrault plays with the codes of the western in a peculiar, almost gothic film of uneven strangeness, imbued with a ghostly, romanesque quality.

A trade of perfumes for (fake) diamonds that turns into a shootout; a tense ball where drunk, triumphant Northerners pester the local women, treated as prostitutes under General Order No. 28; a horse carriage oscillating on the verge of a cliff; hooded bandits chasing a convoy; rifles, galloping horses, dynamite and even a touch of voodoo; thick fog and a snowstorm in the great American West where railways are about to change everything: with Savage State, which had its international premiere in the Voices Rotterdämmerung section of the 48th International Film Festival Rotterdam, David Perrault attacks the western genre head-on, an extremely rare entreprise for a young French filmmaker.

Revealed in Critics’ Week in Cannes in 2013 with Nos heros sont morts ce soir (which was already a stylistic reinterpretation, of 1930s American cinema this time), the director/writer attempts to respect the codes of the genre (its wide landscapes, its harshness, its face-offs and viril men) all the while deforming them (with a hyper-expressive visual style that pushes the film towards the fairytale and the waking nightmare, and with the central role played by women in the story). An audacious entreprise which isn’t without its risks…

It is December 1863 in St. Charles, Missouri, and the American Civil War is raging. Threatened by the arrival of Northerners and the crumbling of their sheltered world, a bourgeois family of French colonisers decides to flee and return to Europe with the three daughters of the house, all of them fit to be married: Esther (Alice Isaaz) who gives the film its point-of-view, Justine (Déborah François) and Abigaelle (Maryne Bertiaux). Edmond, the father (Bruno Todeschini), hires the experienced mercenary cowboy Victor (Kevin Janssens) to lead the expedition, which also includes his extremely religious wife Madeleine (Constance Dollé) and his lover Layla (Armelle Abibou), the black maid of the family. But a gang of blood-thirsty outlaws headed by Bettie (Kate Moran), a woman dangerously obsessed with Victor, is on their trail…

With very contrasted visual choices (shadows and backlighting, slow-motion, contrasted colours, blurriness and fragmentation), David Perrault creates an atmosphere verging on the surreal which struggles to imbue the confined spaces of the film’s first act, before blossoming in the later spectacular natural landscapes where the film seems much more at ease. Mixing together (too) many topics and styles in its ambition to tackle the paradoxes of freedom and emptiness under a feminist angle, and to respect the tropes of the western all the way playing with them, Savage State struggles to find a clear personal identity in a series of scenes that are alternately really interesting and excessively theatrical. A set-up where the actors are not without merit, but which leaves the sensation of a strange cinematic experiment within the genre of the European western, which was recently explored much more wisely and efficiently in Gold, by German director Thomas Arslan, and in Jacques Audiard’s The Sister’s Brothers, for example.

Produced by Mille et Une Productions and by Metafilm (Canada), Savage State is sold internationally by Pyramide, which will also release the film in French cinemas on 26 February.