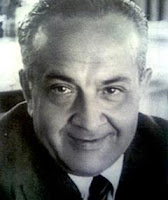 Italian producer, production manager and supervisor Gianni Minervini died in Rome, Italy on Febuary 4, 2020. Born Giovanni Minervini in Naples, Italy on October 26, 1928, he was the son of the journalist Roberto (1900-1962) and brother of the sculptor Annamaria. He began his film career as an actor and then debuted as a producer in 1976, when he co-founded with the brothers Antonio and Pupi Avati the production company A.M.A. Film. The Avati brothers left the company in the late 1983, leaving the sole Minervini leading the company. He won a best foreign film Oscar in 1991 for “Mediterraneo”. He was a production manager on “The Sign of the Coyote” (1963) and “Death Rides a Horse” (1967), a production supervisor on “Blood and Guns” (Tepepa)” (1969) and a producer of “Night of the Serpent” (1969).
Posted by Tom B. at 6:52 AM