Who Are Those Composers? ~ Viktor Oransky 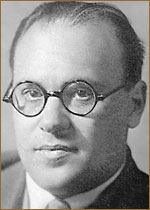 Composer Viktor Aleksandrovich Oransky was born in Feodosia, Crimea, Ukraine on May 4, 1899. He received his musical education at the Moscow Conservatory in the class of K. Igumnov where he studied piano. For several years he was mainly engaged in pedagogical and accompanist activities. In the 1920-30s he was in charge of the musical part of drama theaters, writing music for performances.

He then worked at the Bolshoi Theater Choreographic School of the USSR, which gave Oransky the opportunity to study in detail dance music and the specifics of musical drama of ballet.

In his first ballet “The Footballers”, written in 1930, Oransky paid tribute to his fascination with an eccentric theater form; in the ballets “Three Fat Men” (1939) and “Windsor Pranks” (1942) he turned to the traditional forms of classical ballet and created music endowed with witty characteristics, lively and convenient for the stage embodiment. He was commissioned the conductor of the 2nd studio of the Moscow Art Theater (1923-1926), VTsSPS Theater (1932-1935), Theater. M.N. Ermolova (1947-1950).
As V. Oransky he wrote 15 film scores from 1925’s “Shuquras saidumloeba” to 1953’s short film “Volshebnyy magazine”. His music was used posthumously in the 1975 film “The Humpbacked Horse”. His only western score was for the 1946 Jack London based Russian film “White Fang” starring Oleg Zhakov.