In a valley two kilometers east of the town of Daganzo, located about 35 kilometers east of Madrid, the set of a Mexican fort was built for the American produced film "The Guns of the Magnificent Seven" (1969). Two years later on this same terrain the American screenwriter Philip Yordan, who had worked on many western films and who in the 1960s had moved to Spain, collaborated with the producer Bernard Gordon in the production of several spectacular films, such as "La battaglia dei gigantic" (Battle of the Bulge, 1965), "Custer eroe del West" (Custer of the West, 1966), " Krakatoa, est di Giava" (Krakatoa, East of Java, 1968), "La grande strage dell’impero del sole" (The Royal Hunt of the Sun, 1969), created a production company and built a film factory: Estudios Madrid 70. The first film they produced was "A Town Called Hell" (1971), for which, a short distance from the set of the previously built Mexican fort, a similar set was built on the top of a hill (in a more open and panoramic position). It is a Mexican fort with high walls and various buildings inside, among which, to the left of the entrance door, a high tower and a church stand out, suitable for being able to shoot inside; then there are houses with porticos and the "cellar". The project was by Julio Molina, designer of the great Mexican fortress made for the film "El Condor" (1970) a few hundred meters away from Rancho Leone, south of Tabernas in Almeria. Later, on the hill east of Daganzo, a few tens of meters away from the Mexican fort, an American village was built with a wooden buildings and a large brick saloon (also suitable for indoor shooting), where the sequence was shot for “Capitan Apache” (1971) (in which the Mexican fort is also used); “Bad Man’s River” (1971) (and the Mexican fort was also used); “Pancho Villa” (1973) (in which the American set represents the city of Columbus New Mexico, on the border with Mexico); “The Valley of the Dancing Widows” (1975). Other westerns shot in Daganzo are "The Man Called Noon" (1973) in which the American set and the Mexican fort represent a single "city"); "The Spikes Gang" (1973) (American set and church interior); "The Stranger and the Gunfighter" (1974) (American set and Mexican fort); "Whiskey and Ghosts" (1974); "Comin’ At Ya!" (1981); "Straight to Hell" (1986). Little is exploited is the surrounding landscape, which appears in some scenes of "A Town Called Hell" and in the spectacular railway sequence of the collision between two trains of "Pancho Villa", for which shots were filmed with a real locomotive in the secondary railway branch of La Calahorra (east of Guadix, in the province of Granada) they are combined during assembly with shots taken with a miniature train in the countryside around the set of Daganzo. In 1979 Philip Yordan returned to the United States and the Daganzo film factory is taken over by Spanish director and producer Juan Piquier Simon, who continues to make films, but of other genres, until 1985, when a big fire destroyed the set. Of that large structure, today, in addition to many remains on the ground, some ruins of the buildings of the Mexican fort remain, including the tower of the church (with the four-lobed windows that can be seen in some scenes in the interior of "A Town Called Hell", "Pancho Villa"), the base of the tower, a water trough and, a few tens of meters away, three brick sides of the large saloon. In the area, some industrial buildings arose a few hundred meters to the west. To the east, on the other hand, a vast barren landscape extends, on the horizon of which a "mesa" stands out, which appears in a scene from "Pancho Villa" which also distinguishes it from Madrid's Barracas airport. 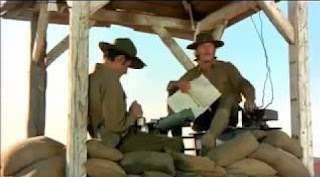 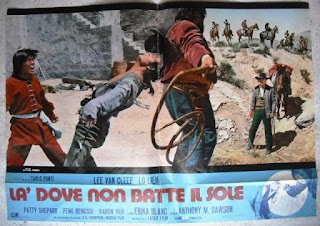