26 kilometers north of the city of Cuenca, capital of the provincial province of the same name, in central Spain, is the Meseta della Muela, at 1,400 meters above sea level, it spreads over a 20 square kilometer surface called Ciudad Encantanda, a labyrinthine area formed by large gray limestone rocks, isolated or in groups, which over a very long time span have been shaped by thermal erosion, from underground waters (it is in fact a carsica area), rocks have taken on curious and bizarre shapes. Many of them have the appearance of gigantic mushrooms, others of castles, walls, bridges, arches, animals, and human heads. This singular topography and geology, has become a tourist destination for many decades, it has also affected filmmakers. In this landscape some scenes of “The Pride and the Passion” (1957) were shot. In the film “The Valley of Gwangi” (1969) by James O'Connelly, with James Franciscus, Gustavo Rojo, with special effects by Ray Harryhausen, the Ciudad Encantada represents the "Forbidden Valley", a remote valley in the mountains of Mexico, where in the late nineteenth century a group of cowboys confronted and captured a dinosaur, which, was called Gwangi, it exhibited in a circus: in the final part of the film, in the cathedral of a Mexican city in which the dinosaur broke loose. La Ciudad Encantada also appears in “Conan the Barbarian” (1982) by John Milius, with Arnold Schwarzenegger. For “The Last Tomahawk” (1965); in “The Wild and the Dirty” (1968); in a sequence of “The Mercenary” (1968), in which Kowalski, known as the Pollock (Franco Nero), falls into a trap by the Curly gang (Jack Palance), but is saved by the Mexicans of Paco (Tony Musante). For short scenes from the initial part of the film “The Fury of the Apaches” (1964), set in Arizona at the time of Geronimo's guerrilla war, and used the area, in a small town about sixteen kilometers from Ciudad Encantada, located in a valley of the mountains wooded in the shape of planks of the Serrania de Cuenca. Also in the initial part of this film, which features three men on horseback, the Laguna de Una also appears, a small body of water around the area. As a setting for the first shot of “The Fury of the Apaches”, another singular site of the mountains northeast of Cuenca had been chosen: Ventano del Diablo, a natural observatory above the oorida gorge ("hoz") of the Rio Jucar. 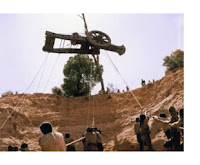