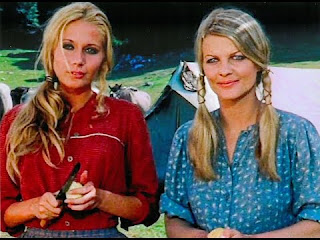 In 2020 the film "They Call Me Tinity" celebrates its 50th anniversary. That naturally caused us to celebrate this topic properly for the limited Spencerhill fan base party.

When the topic for the Spencerhill fan base party 2020 was fixed, nobody expected what would develop from it.

And now we can announce more and more guests who participated in the film "They Call Me Trinity".

Gisela Hahn and Elena Pedemonte are of course known to die-hard fans, we will help everyone else with our blog here. They are the two nice blond women with whom Terence Hill tinkers with and, whether serious about Bud or not, even spoke of marriage.

Gisela Hahn was born on May 13, 1943 as Gisela Drenkhan in the small town of Briesen in what was then West Prussia. The advance of the Red Army forced the family to flee. So Gisela came to Hamburg at the age of two. Her parents divorced shortly after the war. While her mother emigrated to Brazil, her father married again and moved with Gisela to Visselhövede on the western edge of the Lüneburg Heath. Here Gisela went to school, participates in a lot of sports and later becomes a heather queen. Sport is her great passion and she dreams of studying at the sports university in Cologne. However, the family lacks the money for her studies. In addition, her stepmother insists that Gisela should leave school after she has finished middle school so that she does not live at home for three years until she has finished school.

After finishing school, Gisela Hahn moved south. In Munich she went to drama school and took acting and singing lessons there. She lived and worked in Fischbachau am Schliersee, where she worked as a medical assistant to pay for her acting classes.

In 1963 she got her first theater engagement. The play is called "A Kiss and Nothing Else" playes at the theater on Brienner Strasse. On the advertising posters, the director of the theater shortened her name to "Gisela Hahn" without Gisela's knowledge. Gisela is unhappy about it because she doesn't like the new name at all. She still keeps it for the next engagement at the Deutsches Theater, because she is told that changing the name will bring bad luck.

Gisela Hahn made the decision in 1968 to leave Munich and Germany and go to Rome.
Italy was the Mecca of European cinema at the beginning of the 1970s. Well over 300 films are made here every year and since the Italians usually synchronize their films afterwards, a great many European and American actors try their luck in the Italian capital during this time.

One day Gisela gets a call in Rome. Can she come to the Paolis film studios because there could be a role for her. Once there, she receives a script that she should read immediately. She reads the script, but doesn't like the role offered to her at all. When she is almost out again, the producer Roberto Palaggi calls after her and aks if she wants to shoot a western. For the sporty Gisela it was always a dream to play in a western and so she says yes.

Palaggi takes her by the hand and walks with her into a hall on the studio premises. There already shooting and in the middle of it is director Enzo Barboni. Palaggi asks Barboni if ​​he likes Gisela, which he answers with a simple "Bellissimo bellissimo". Gisela is told to play a Mormon girl. Her salary is 1 million lire. Gisela accepts with joy and was therefore seen a little later alongside Bud Spencer and Terence Hills in "They Call Me Trinity". The shooting is a lot of fun for Gisela, she describes the collaboration with Bud Spencer and Terence Hill as fantastic. While filming, Gisela writes a card to her friend Horst Sommer. Horst Sommer is a dubbing director, but he also occasionally shows up in Rome to buy Italo-Westerns for the German market. Gisela writes that she is currently shooting an interesting western that is very funny and does not include blood or violence. She suggests to him to strive for the distribution rights for Germany. Horst Sommer follows his girlfriend's advice and buys the rights to the film for $50,000, doing the business of his life. Gisela Hahn receives a bouquet of roses for the mediation.

In 1983, film distributor and producer Dieter Geissler approached Gisela and asked if they could work together. Gisela brings in her relationships, contacts and good language skills and from then on organizes film festivals and the distribution of German films abroad for the "Cinevox" film distributor. Later she worked in the same function for her partner Bodo Scriba in the "Scriba Film Holdings" with which she is involved in the production of “JFK”, “Free Willy”, “Sommersby” and “Falling Down”. In 1999, after her separation from Bodo Scriba, Gisela Hahn left the film business and went on a theater tour.

But Gisela never completely gave up acting. Although she has not had as many appearances as in previous years, she is always seen as a guest star in German TV series, e.g. in "SOKO 5113", "Coast Guard", "Our Charlie" and "Forbidden Love". To date, Gisela is still in front of the camera. She was last seen in December 2019 in the episode "The Lie We Call the Future" from the crime series "Police Call 110".

Elena Pedemonte was born in Milan on May 30, 1952, but grew up in Sanremo, where she lived until 1970. In her childhood she was nicknamed "Aky".

In 1968 Elena won the Italian election for Miss Teenager and subsequently took part in the "Miss World Teenager" election in the USA. As part of this event, she was even welcomed at the White House on April 5 of the year. Australian winner Janette Anne McLeod will be the winner. In 1970 she represented Italy in the election for "Miss Cinema Europa" in Cesenatico.

In 1969 she worked as a radio presenter at Radio Montecarlo. Here she is known by her nickname "Aky". In 1970 she finally switched from the radio to the cinema.
In 1970 she made four films in Rome. It starts with the comedy "Il presidente del Borgorosso Football Club", which started on October 16, 1970. Here she can be seen alongside Alberto Sordi. Her next three films are all Italian westerns. The first of these three westerns is "Wanted Sabata", in which they can be seen alongside Brad Harris.

Her manager Giacomo Ciarlantini then arranges for a casting appointment at the Cinecittà in Rome for a role in a new, strange western. We are looking for actresses who should play young Mormon girls. On this date Elena meets director Enzo Barboni, whom she meets as a very friendly person. She gets the role and a short time later can be seen in "They Call Me Trinity" alongside Bud Spencer and Terence Hill.

This role will unfortunately remain Elena's best known, because after that you only see her one last time in a small role in "Blindman". Fate then ended her career before she really started. Elena Pedemonte is the victim of a serious traffic accident in which two people die. Elena survives seriously injured and spends the next five months in the hospital. After that, there is no longer any thoughts of continuing her career. She gives up acting and returns to her family in Sanremo.

Her disappearance after the tragedy creates rumor that Elena had also died in the accident. For example, Gisela Hahn and Remo Capitani still report on Elena's accident death years later in interviews. These rumors will not be refuted until 2013 when fans research their history and find it.

Happiness returns to Elena in Sanremo. She met her first husband and married in 1973. Three years later, her daughter Giorgia was born. In the early 80s, the marriage broke up and Elena moved to Milan, where she worked in advertising. She married a second time in 1989, but the marriage lasted only two years. After her marriage failed, Elena returned to Sanremo in 1991, where she met Paolo a year later. She is not getting married for the third time, but has been happy with Paolo for over 25 years.

In 1999 Elena visited some childhood friends in Mexico. They emigrated there in the late 1980s and lived in the small town of Ixtapa Zihuatanejo on the country's west coast.

An Italian restaurant called "Il Beccofino" opened. Elena immediately falls in love with the place, the country and the people when she visits and decides at some point to want to live there too. Seven years later, in 2006 Elena can finally realize her dream. Since then she has lived happily in Mexico. However, she is still very attached to her Italian homeland and returns every year for at least one month.

Elena Pedemonte loves art and literature and has a great passion for animals and nature.

From Thursday, May 7th to Mother's Day, May 10th, 2020, a long SpencerHill fan base weekend will be organized for you in the legendary and exclusive SpencerHill City. Sunday is all about "SpencerHill Kids Sunday" under the motto - child-friendly like Bud and Terence - the western town is now also open to regular day visitors. (Of course, a surprise is guaranteed for mothers on Mother's Day)

The SpencerHill Camp at the gates of the city allows you cheap overnight stays directly at the base. Of course, the fan base party remains limited (max 850 tickets) and therefore family and exclusive for you.

The fanbase ticket allows free access to the western city from 07-10 May. - Welcome to the SpencerHill universe!]