Madrid Far West: a guide covers the 200 westerns shot in the region 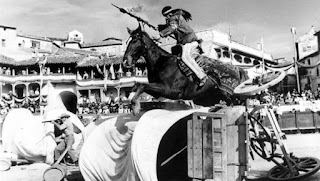 Those who shared filming with Clint Eastwood in Hoyo de Manzanares still remember how the American actor drank from the botijo, ate snacks and took a nap in the back of a car in the full sun. It was precisely his desire to know Spain that made him accept Sergio Leone's offer to roll "A Fistful of Dollars" in 1964. His decision forever changed the history of the region. What was going to be another low-cost western film meant, with its success, the takeoff of an entire film industry that transformed the economy of many towns in the region. Small towns that, like Hoyo de Manzanares, turned their sites into the gorges, the valleys, the desert and the ranches of the Far West.

The Community of Madrid has been trying to create value for that cultural legacy for years, claiming those locations as a still valid scenario for filming movies. His latest initiative was by the Ministry of Culture and Tourism, directed by Marta Rivera de la Cruz, within the framework of Fitur Screen, the monographic section specialized in film tourism. A guide entitled Community of Madrid: Far West Territory that presents the locations of some of those feature films. In total, more than 200 of the 600 plus that were produced in Europe. A figure that exceeds those of other areas of Spain such as Almeria, which, however, has managed to exploit the pull of places like the Tabernas Desert. 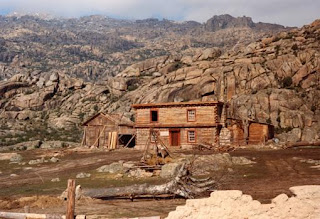 The publication, made through Film Madrid, the filming promotion office in the Community, includes four routes that run through the 36 municipalities in which part of these Anglo-Saxon films were recorded. Among them is the capital itself, with its film studios - for example the CEA, located in Arturo Soria and that today commemorates the bridge that crosses the A-2 at its entrance to Madrid – or Casa de Campo, where several films were also shot including “A Fistful of Dollars” sequences. John Wayne himself conducted a role in “Circus World”. 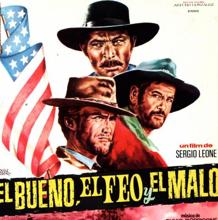 Divided into four routes that are collected in a guide map, the northwest one stands out for being the place where most of the scenes of 130 of these westerns were recorded. La Pedriza hosted the first of these shootings in 1941 with the title "Dirty Gold", by Eduardo García Maroto; and another of Leone's classics, "The Good, the Ugly and the Bad" (1966). The last recorded there, in 2016, was "Stop Over in Hell", by Victor Matellano. The Madrid filmmaker is precisely the author of this publication. “It is time to claim Madrid as the setting for all these films. The locations are still there and have a great load of romanticism,” he tells ABC.

“This idea doesn't just want to look to the past. It is important that we look to the future because I am sure that this synergy between cinema and tourism can bring us very good news. On the one hand, we want to strengthen the audiovisual sector and that with this guide professionals from all over the world know everything that our region can offer as a set for their filming. And on the other, we encourage film tourism, more and more tourists want to visit the places where the scenes of their favorite movies and series were shot and that is a potential that the Comunidad de Madrid has and that we have to know how to take advantage of,” adds the counselor of Culture Marta Rivera de Cruz .

His father, who participated as an extra in many of these films, inoculated his passion for this genre. "I don't like to define it as Spaghetti western," he explains, criticizing the derogatory origin of the term. “You have to imagine those towns at the time and the shootings in which more than two thousand people participated. Imagine, for example, people's faces when they saw Claudia Cardinale and Brigitte Bardot bathing in a barrel for "Frenchie King" (1971)," he says. The latter was filmed in Colmenar Viejo, the municipality with the most feature films in the west - with five active sets at once - such as "Django" (1966), by Sergio Corbucci, or "The Guns of the Magnificent Seven" (1969 ), by Paul Wendkos.

Madrid had its "Rio Grande" on the beach of Alberche and the train sequences - of titles such as "Savage Pampas" (1966), by Hugo Fregonese or "One Hundred Rifles" (1969), by Tom Gries - were recorded on the tracks abandoned from Villamanta. The list of directors - Robert Siodmak, Raoul Walsh or Richard Fleischer - and actors - Robert Mitchum, William Shatner, Burt Reynolds , Terence Hill , Gina Lollobrigida and Lee Marvin - who went through Madrid is long. This is what Matellano will talked about this in the Fitur along with José Luis Galicia, art director in some of these films; the actors Manuel Zarzo and Guillermo Montesinos; and Javier Ramos, co-author of the book “Cinema of the West in the Community of Madrid”.