Tonino Delli Colli and that trolley against nature 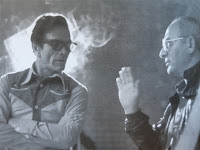 An evening with old friends at the Casa del cinema in Rome, wanted by his son Stefano, to remember a craftsman of light, one of the pioneers of photography in Italian cinema who transformed a craft into a great artistic expression. A tribute to Tonino Delli Colli, 15 years after his death, entrusted to the documentary Once Upon a Time ... Tonino Delli Colli Cinematographer by Claver Salizzato and Paolo Mancini , which for now will be distributed in festivals and events.

The film is inspired by the book by his son Stefano, published in 2017, "Tonino Delli Colli, my father, Between cinema and memories" which traces the story of one of the greatest directors of photography, from the beginning to Cinecittà in the late 1940s the latest film, of over 135 films, Roberto Benigni's La vita è bella (1999). A career marked by 6 Silver Ribbons, 4 David di Donatello and the prestigious ASC-American Society of Cinematographers Lifetime Achievement Award, which was withdrawn in Los Angeles in 2005 a few months after his death.

Tonino Delli Colli has collaborated with directors such as Mario Monicelli, Dino Risi, Federico Fellini, Roman Polanski, Louis Malle, Lina Wertmüller, Marco Bellocchio, Marco Ferreri, Margarethe Von Trotta. But above all he was from the beginning the trusted collaborator of Pier Paolo Pasolini. It was 1961 when Federiz, the company founded by Fellini and Rizzoli, produced Accattone, Pasolini's debut that begins to make some sequences with Carlo Di Palma director of photography. However, the footage does not satisfy Fellini who abandons the project. Fortunately, help comes from the director Mauro Bolognini who convinces the producer Alfredo Bini to finance the film. In the meantime Di Palma is busy on another set, recalls Stefano Delli Colli, and then "my father is called, who immediately accepts the proposal, even reducing the compensation, to which the Americans had accustomed him". A not accidental encounter for Tonino who was looking for an important test with auteur cinema.

“A blanket of primroses. Sheep against light (put, put, Tonino, fifty, don't be afraid that the light will get back - let's make this cart against nature!). The cold warm grass, tender yellow, old new, on the Holy Water. Sheep and shepherd, a piece of Masaccio (try with seventy-five, and trolley up to the first floor) ". In these verses ("Worldly Poems") written by Pasolini in 1962 there is the ironic chronicle of the meeting between the writer, in his directorial debut, and Tonino Delli Colli, who from that moment will sign almost all Pasolini's works, except Oedipus king and The flower of the Thousand and One Nights. Pasolini, by his own admission, does not know the cinematographic technique, learns it in a short time, "a week", and immediately asks Delli Colli to shoot the scenes in a completely different way, outside the classical canon. The producer Bini remembers in the documentary the phone call of a Tonino who was very worried about Accattone’s "broken" photograph , "which showed a suburb of livid villages, made of light and three-dimensional contrasts. Pasolini's visionary poetry asked Tonino to make choices that he had resistance to make, however sensing what Pasolini wanted”.

"With Pasolini, the agreement was wonderful even if they gave of her and were not in confidence - recalls Ninetto Davoli before the screening of the documentary - Tonino was a humble person of great professionalism". “He had the extraordinary instinct of light - recalls in the documentary the director Jean-Jacques Annaud who met him on the set of The Name of the Rose (1986), a characteristic of a self-taught who is the Leitmotiv of other authoritative testimonies. Just as his proverbial ability to find the right lighting in a short time conjugated to a rigorous daily schedule that hardly endured over seventeen / eighteen in the afternoon returns. Hence the relationship of love and hate with Sergio Leone, "Exaggerated and perfectionist, busy too many hours on the set", as Tonino remembers that he "reproaches" the many meters of film shot, with scenes repeated dozens of times.

"The documentary maintains the spirit of the book, that of narrating a cinema and an atmosphere on the sets that no longer exist today - explains his son Stefano - Unpublished materials such as super 8, VHS tapes, skillfully restored and filmed and images from from foreign and private archives. And we see the backstage of Accattone, Mamma Roma, Once upon a time in the West ”. Many testimonies collected: Luca Bigazzi, Pasquale Cuzzupoli, Elda Ferri, Roberto Benigni, Vincenzo Mollica, Furio Scarpelli, Giuseppe Rotunno, Nicoletta Braschi, Pasquale Mari, Piero De Bernardi.

Claver Salizzato in emphasizing how rare documentaries are about directors of photography, also because it is difficult to recognize the authorship of this profession, recalls some significant dates of Tonino Delli Colli's artistic career: 1950 when with a few colleagues he created the association of the cameramen then became AIC-Italian Association of Cinematographic Photography Authors; 1984 the Bafta nomination, the British Oscars, for Once Upon a Time in the West ; 1999 the Oscar for La vita è bella and 2005 with the American trip".

Finally, Laura Delli Colli remembers Tonino's partnership with her second cousin Franco, her father and affirmed operator: “What remains of the 'firm'? A legendary idea of ​​the cinematographic profession, then artisan even if unconsciously artistic ".