Madrid claims that 200 westerns that were recorded in the region 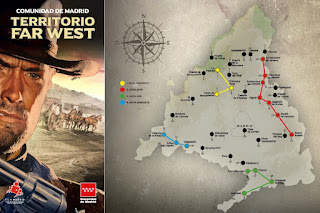 "Most of the Westerns shot in the Spanish territory were shot in Madrid, not in Almeria," recalls film director Victor Matellano.


Therefore, the regional government has prepared a guide to the locations of the western films that were shot in Madrid. A project that aims to boost interest in Madrid among filmmakers.

Matellano acknowledges the appeal of reminding a director that the location where he is going to shoot his film was previously chosen by celluloid myths such as Stanley Kubrik or Orson Welles. Places like Navalcarnero, Aranjuez, Hoyo de Manzanares, El Escorial, Colmenar de Oreja or La Pedriza were the scenes chosen by those filmmakers.

In the old Toledo pavilion of the Casa de Campo, today a famous restaurant, the film that raised Clint Eastwood, 'A Fistful of Dollars' was filmed. Indians and cowboys also ran in the desert of Ciempozuelos in 'For a Few Dollars More' or 'Zorro' where Alain Delon (1974) brandished his foil in the Castle of Viñuelas.

The guide consists of more than 200 films and 36 different locations on 4 routes that run throughout the community.

They even arrive at Parque del Retir or, in the heart of the capital. There Johnn Wayne filmed some of the sequences of the 'Circus World' (1964). A film directed by Henry Hathaway that was not, strictly a western, but in which we could see Wayne ride and even stop a stagecoach pulled by runaway horses. It was a production whose cast had mythical names like Rita Hayworth and Claudia Cardinale. And it all happened in Madrid. 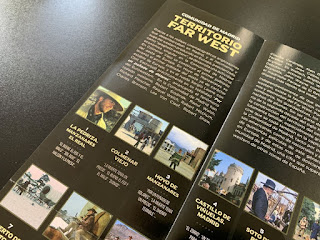