Who Are Those Composers? ~ Nora Orlandi 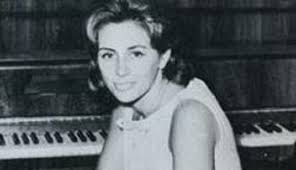 Italian composer Nora Orlandi was born Nora Matilde-Rosa Orlandi in Voghera, Lombardy, Italy on June 28, 1933 sometimes credited under the name Joan Christian and Jan Christiane. The daughter of opera singer Fanny Miriam Campos, and her younger sister is the singer-songwriter Paola Orlandi [1938-    ]. Nora is a pianist, violinist, soprano vocalist, composer and occasional actress. She studied music in the conservatory and composed her first film “Non Vogliamo Morire” in 1953-54 at the age of twenty. She didn't conduct her own music, and composed without instruments, but later wrote her music with the aid of the piano. In a music world dominated by men she was the first female film composer of the Italian cinema, she composed scores for Spaghetti Westerns, Eurospy films and gialli throughout the 1960s and is best known for "Dies Irae", a short piece she wrote and performed for Sergio Martino's “The Strange Vice of Mrs. Wardh” (1971) which was later reused in Quentin Tarantino's “Kill Bill: Volume 2” (2004). According to her own testimony, her scores were only 30% of her activity, the rest being shows for TV and radio performances. She often worked with collaborators including, Alessandro Alessandroni, Paolo Ormi and Robert Poitevin. Nora founded the singing groups ‘Quartetto 2 + 2’, ‘I 4 + 4 di Nora Orlandi’. In the 1980s she became a music teacher. She married and architect in 1957 and has 2 children.