Paco Barrilado: "I think I am between El Feo (The Ugly) and El Bueno (the Good)" 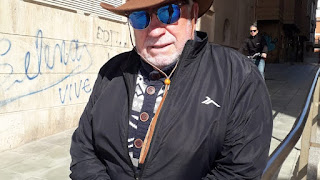 Paco Barrilado is 77 years old. C at 4 he was already the sheriff of the celluloid in the neighborhood of El Quemadero. For sixty years he has worked as a stunt double in more than 200 films shot in Almeria. A tough guy who gets excited watching Madison Bridges and has developed a personal philosophy that dismantles the sorrows of those who come to listen to their battles in the cinema.

What did you play as a child?

Like I am living now. I was between 4 and 12 years old. He took a white sheet, cast the shadow of cut-out dolls on it and entertained the entire neighborhood of the Burner. He charged buttons to decorate the dolls and then in cents.

What profile of these do you identify with: of the Good, the Ugly or the Bad?

I think I am between the ugly and the good, although I looked better as a kid; Better than Rock Hudson. You can watch it on the Internet when I worked as a double in more than 200 movies.

My friend Manolo ... I worked with him on the movie “Tierra de Pistoleros” and he drew me a picture after eating some crayfish in Garrucha. He also said that "To er mundo é ... got better!".

People are not bad when they are normal, what happens is that when there is any adversity they transcend the psychological genes of men or women. I do not understand evil, envy or theft. You give me art and entertainment and there is happiness within me.

The gunmen are always shown with a loaded shotgun.

The weak brought them to work, it is that the slaves have always been weak and if the sheriff was docile they did not mess with him.

How do you fix the problems?

I solve my problems by not having them.

A study reveals that one in 10 people feel lonely, did the Lone Ranger have that feeling?

Some, perhaps, others not. A llanero that is in the nature with the cows and with the bulls is entertained, although with the physiological needs he went to the brothels.

In his youth his name was Frank Barry.

Frank for Paco and Barry because in America everyone is called that. It was cinematic (laughs).

Do you feel that your life is that of a celebrity?

Not at all. I will soon fulfill my golden wedding. I have a great woman, two children and two grandchildren.

What do the Tabernas and Mini Hollywood desert mean to you?

Are my life. In Tabernas I grabbed a horse at 6 in the morning and returned it at 7 in the afternoon. Rolling one and a thousand shots combining with the actors, and Mini Hollywood because it's a feeling of mine being alive.

What are the best movies that have been shot in Almeria?

Sergio Leone created an environment like the one Tarantino is now creating. But here have been filmed very good films like those of Cleopatra or Cleopatra and Marco Antonio, Patton, Lawrence of Arabia ... some with Oscar.

On a break from the movie “Once Upon a Time in the West” Claudia Cardinalle was going down a kilometer on foot to the railroad tracks. I asked her that if she wanted to get on the horse, she weighed 50 kilos, I raised her on one arm.

A tough guy like you have you ever \ried watching a movie?

No, but I was excited to see “The Bridges of Madison County” and “The Mule”, by Clint Eastwood.

Which is your favorite song?

The soundtracks of “For a Few Dollars More” and “Rocky”. I both have them on my
cell phone.

Who or what has given you the best lesson?

Without a doubt, life, because it teaches you to see things that you could never imagine. I put myself in a relaxing situation and I paint the light of the Mediterranean. I have already done five exhibitions with my paintings.

You are very philosophical; tell me an inspiring thought out loud.

Honest and orderly life and use few remedies, and put all means in not rushing for anything. Moderate food, exercise and fun, drink in moderation, go out for a while, little confinement and much treatment, and much occupation.

What plan do you have for today?

I am working on the script of my new film, a western for which I want to count on the collaboration of José María Lindes. But today I also have to go to the gym. You have to always be on the move.