Who Are Those Gals? ~ The Cocconcelli Twins 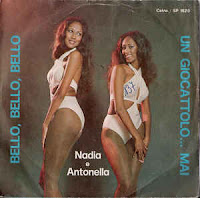 Little can be found about the Cocconcelli Twins, Antonella and Nadia. Probably born in the late 1940s but no place of birth can found. The twins were singers, who released three singles in the mid-1970s, and dancers who had appeared on the Italian television show ‘Foto di gruppo’. In 1974 the two became acquainted with singers Franco Gatti and Angelo Sotgui of the singing group Ricchi & Poveri (Rich and Poor) and became part of their touring show. Antonella married  Gatti and Nadia married Sotgui in 1982. Antonella is the mother of two children one of which one, Francp Gatti, died in 2013 at the age of 21. Nadia is the mother of three children. Both left show business shortly after their marriages and they are still married to Gatti and Sotgiu. The twins appeared in only one Euro-western as waitress/dancers in 1973’s “Another Try, Eh Providence? Starring Tomas Milian.