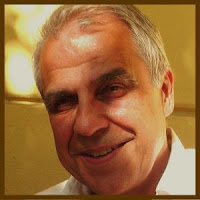 German voice actor Michael Brennicke died in Munich, Bavaria, Germany on March 25, 2019.  He was 68. The son of actor and director Helmut Brennicke and the actress Rosemarie Lang and brother of the radio presenter Thomas Brennicke Brennicke was born in Munich on October 5, 1949.. He was the German dubbing voice of such actors as Chevy Chase, Dustin Hoffman and Adriano Celentano. German film and TV audiences were familiar with his bass voice on ZDF broadcasts. He was also the voice of Kabel 1. Brennicke was the advertising voice for Jack Daniels whiskey. In 2009, Michael received the synchronous listener award The Silhouette in the Best Dialogue Book category for a series alongside Carina Krause for Battlestar Galactica. He is the father of an adopted daughter, actress  Nadeshda (born in 1973). Michael was the German voice of actor Antonio Cantafora in 1971’s “Black Killer”.
Posted by Tom B. at 8:08 AM