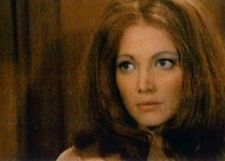 American model, actress, singer Lucretia Love died at her Seychelles Island home off the coast of Africa on January 9, 2019. She was 78. Born Lucretia Hickerson in Borger, Texas on March 25, 1941 she first came to the attention of legendary Austin, Texas entertainer Cactus Pryor and sold chicken on his television show. She then became Lucretia Love, a superstar of the stage and screen. Often credited under the name Lucrezia Love she appeared in thirty-six films. Her first professional film work was the 1965 Italian romantic comedy, “Love Italian Style”. Love appeared in four Euro-westerns: “Go with God, Gringo” (1966) as Carmen; “A Colt in the Hand of the Devil” (1967) as Janet; “Blindman” (1971) as one of the auctioned brides; “The Two Sons of Trinity” (1972) as Lola.
Posted by Tom B. at 8:26 AM