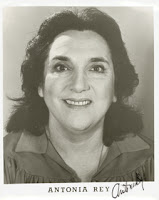 RIP Antonia Rey. Cuban born theater, film and television actress Antonia Rey died in a Manhattan, New York hospital on February 21, 2019. She was 92. A leading theater actress in Cuba she fled the island nation with her husband stage director Andres Castro when Fidel Castro came to power in 1959. They joined the first wave of Cuban exiles, many of them wealthy professionals. They had visas and could board flights to Miami, though they could take nothing with them except the clothes they were wearing. Most Cuban exiles settled in Miami, but Ms. Rey and her husband continued on. They wanted to restart their lives in New York because it was the center of the theater universe, though they had no family or friends there. She was able to get into acting fairly quickly. She met someone who got her a small part, and one thing led to another, Her Broadway debut came in 1964, when she landed a role in the chorus in “Bajour,” starring Chita Rivera. She played a Mexican woman in “A Streetcar Named Desire” and had small roles in two other productions of Tennessee Williams plays, “The Rose Tattoo” and “Camino Real.” She continued working into her 90s. In December, she finished the second season of a series called “Happy!” for the Syfy Channel, in which she played a witch. Antonia appeared in one Euro-western as Concha in ‘Doc’ (1971) starring Stacy Keach and Faye Dunaway.
Posted by Tom B. at 1:05 PM