“La marcha del diablo” (The March of the Devil”) 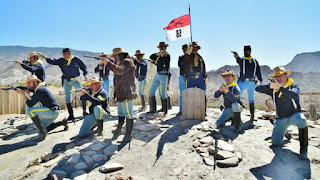 On this occasion, the set of the western town was transformed into the town of Casa Grande, in southern Arizona, where part of the action of this film takes place, where the vicissitudes of a cavalry squadron are told, which will be involved in a plot where problems with the Indians will be mixed after the rise of Geronimo and the constant skirmishes with a group of Renegades led by a former Confederate captain who yearns for the South.

The cast was made up of members of the Group of Friends of Almería Western Museum of Cinema, a place of thematic restoration dedicated to the Western world, although it has collaborations of supporters and important personalities from Almeria, the case of the film location locator, Diego Fernández, had retired the famed atrecist Diego Rodríguez, the horseman Antonio Ramírez, the journalist of Canal Sur, Antonio Hermosa and Diego Martínez, a journalist from Diario de Almería who plays a sheriff's deputy.

On this special day the teacher, actor and collaborator, Enrique Durio, who for a few hours left his class to become a reputed bounty hunter.

The film with flashes of films like Duel at Diablo, The Last Train for Gun Hill, Only the Brave and Rio Lobo was conceived as a game, an adventure which shows that with very little money and many selfless collaborations much can be achieved.

All the props have been made without outside help and several techniques will be used to recreate fortified environments and even the arrival of the 10:10 train to the mythical town of Taberna. All this thanks to the selfless collaboration of all the members of the group and professionals such as the filmmaker Miguel Montoya, who handles the camerawork and who will aalso be in charge of editing. The dressing room has been loaned by Armory Leonardo Giménez.

The film, as its screenwriter and director tells, contains some artistic licenses, such as the population of Casa Grande that was founded two years after the action or the 5th cavalry itself, the protagonists of the story, which were never in Arizona. Moreover, in Arizona there are no palm trees, seeing these in the scenes set in the Spanish Mission of Santa Maria del Rio, another of the artistic licenses.
Posted by Tom B. at 5:57 AM