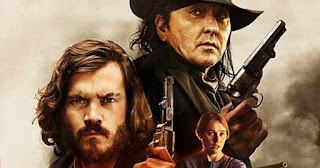 Never Grow Old is a dark, gritty western from Irish writer/director Ivan Kavanagh. A trio of repugnant outlaws take over a bleak frontier town. Their lawless, godless ways clashing with the fire and brimstone preachings of a temperance movement. Never Grow Old is an unforgiving look at human nature. The rain and mud soaked setting matching the ugliness of the premise. The film is absolutely riveting. John Cusack has his best performance in years as the terrifying and murderous villain.

The film opens in the frontier town of Garlow. The year is 1849. Emile Hirsch stars as Patrick Tate, an Irish undertaker and carpenter struggling to make ends meet. He has a beautiful pregnant wife, Audrey (Déborah François), and two small children. The family is happy, even under the strict religious rule of the town preacher (Danny Webb); who has banned liquor and prostitution.

A stormy night brings three dangerous men to Patrick's door. Dutch Albert (John Cusack) and his vicious gang are searching for a former partner. Dutch wants a drink. He's keen to learn the town has no saloon or women for hire. Dutch buys the local hotel and turns it into a rabble-rousing brothel. Patrick is soon awash in business burying dead bodies. But as his coffer grows, the town's descent into despair tests Patrick's resolve. He's increasingly alarmed by Dutch's mute, tongueless sidekick, Dum-Dum's (Sam Louwyck), ominous attention to Audrey.

Ivan Kavanagh enthralls with this gripping tale of morality. Emile Hirsch as Patrick and his immigrant family struggled for acceptance by the town's bible-beating Christians. Their favor was harsh, but peaceful. When Dutch starts to rule, he gives Garlow's men the fleshly sins they crave. He has no belief or respect for religion. Dutch emasculates Patrick with zero fear of recourse. Bury the dead, take your money, and keep watch over that pretty wife. The relationship between the two men is skillfully crafted. The boundary between right and wrong is clear. Each man must make his choice to cross it.

John Cusack is nearly unrecognizable. His calm demeanor and sinister dialogue makes Dutch Albert spectacularly threatening. He isn't the mustache twirling, bad guy wearing black, western archetype. Cusack's long stringy hair and perpetually wet face amplifies his evil countenance. I love that Kavanagh never has Dutch Albert raising his voice. You hang on his every word as if it's the last you'll ever hear. Dutch Albert's victims get a cold reckoning before he finishes them off. John Cusack hasn't been this good in as long as I can remember.

Garlow itself is instrumental in setting the dreary mood. The town is covered in mud and dirt. The aged wood buildings and muted colors amplifying the dread. Dutch Albert relishes in despoiling the "sh*thole". The dismal town gives no pause to his criminal activities. Ivan Kavanagh does an excellent job pairing his script with the environment.

Never Grow Old is a welcome reprieve from the terrible westerns I've seen recently. The film is gloomy as hell, but a must see for fans of the genre. I love an understated antagonist. Ivan Kavanagh breathes new life into John Cusack. He reminds us of the actor's formidable talent. Never Grow Old is an Irish production from Ripple World Pictures. It will be distributed in North America by Saban Films.

[Thanks to Chris Casey for connecting me to this review.]
Posted by Tom B. at 6:12 AM