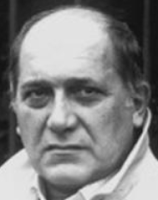 French actor and dubber William Sabatier, who was the French voice of Marlon Brando and Karl Malden, and had also sometimes doubled John Wayne, died Sunday March 17, 2019, in Limoges at the age of 95, announced his son Jean-Michel. In the cinema, William Sabatier was in the casting of Jacques Becker's "Golden Helmet", Costa-Gavras "Bay Slayer", "A Season in Hell" by Nelo Risi, "The Horologist of St. Paul" by Bertrand Tavernier, "The Chinese in Paris" by Jean Yanne or "Flic Story" by Jacques Deray. On television, William Sabatier, recurring comedian of the series "Au Théâtre tonight", has played in about forty series and TV movies. He was also the French voice of Gene Hackman, James Mason, Richard Harris, Martin Landau and Anthony Quinn in more than 200 feature films from the 1950s to the mid-2000s, including "Ben Hur" and "Apocalypse Now". Sabatier was the French voice of Jesus Puente in “Adios Gringo” (1964); Ettore Manni in “Ringo’s Golden Pistol” (1967); Mario Brega in “The Great Silence” (1958); Gastone Moschn in “Drop Them or I’ll Shoot” (1969); Toshiro Mifune in “Red Sun” (1971); Buff Douthitt “Lucky Luke” (1991).
Posted by Tom B. at 10:12 AM