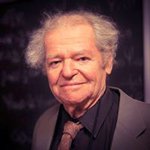 American born Canadian actor Aron Tager died in Toronto, Ontario, Canada on February 28, 2019. He was 84. Born in Brooklyn, New York on June 30, 1934, he appeared in many films, such as X-Men, Murder at 1600, and The Salem Witch Trials. In TV, he was a member of the repertory cast of the A&E TV series: A Nero Wolfe Mystery, and like in film, he appeared in minor roles in countless shows, such as At the Hotel, Earth: Final Conflict, and Relic Hunter. Tager also performed many voices for characters in animated children and adult shows over the years, including Kranky Kong in Donkey Kong Country, which is undoubtedly where most gamers will know him from. He was also an acclaimed artist and was married to actress Ann Page. Tager appeared in the 1995 Euro-TV series “Tales of the Wild – Kazan” as McCready and was also the voice of various characters in the animated TV series; The Legend of White Fang (1992-1994).
Posted by Tom B. at 6:32 PM