We continue our search for film locations for “The Big Gundown”. After Corbett kills the Baron he turns toward Brokston and Brokston rides away only to appear on top of a nearby ridge and fires a rifle shot at Corbett’s feet. He states he’s the man in charge and tells Corbett his pistol won’t be able to reach him from that distance. After another rifle shot by Brokston, Cuchillo walks backward kicks the rifle on the ground at Corbetts feet into the air. Corbett catches it and fires a fatal shot into Brokston’s chest. Brokston falls from his horse and rolls down the ridge dead. 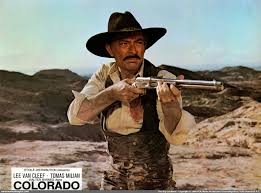 This scene was filmed at Pechina, Spain.

For a more detailed view of this site and other Spaghetti Western locations please visit my friend Yoshi Yasuda’s location site: http://y-yasuda.net/film-location.htm and Captain Douglas Film Locations http://www.western-locations-spain.com/
Posted by Tom B. at 6:27 AM