Who Are Those Gals? ~ Katia Christine 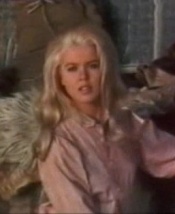 Katia Christine van Kranenburg was born on May 21, 1946 in the suburbs of Amsterdam, The Netherlands. She began modeling at the age of fifteen and then moved to Paris at eighteen without speaking a word of French. She then divided her time between evening classes and modeling before running the castings that are still called "auditions".

She appears uncredited in her first film “Les gorilles” in 1964 with Darry Cowl, Michel Galabru and Francis Blanche and directed by Jean Girault.  After several more films in quick succession, mostly small uncredited roles, she then appears in a 1967 French television series called ‘Salle n° 8’ playing the role of Barbara Wagner. Suddenly he becomes a hot property in both France and Italy and is signed to a contract by Carlo Ponti. In which one of the provisions of the contract is that she is forbidden to marry.

Her first Italian film is a Euro-western starring George Hilton called “Halleluja for Django” (1967) and she appears as Katie O'Brien. Although she appears in several films during the end of the 1960s she does not become a star and appears in several films including “The Adventurers” (1970) in supporting roles mainly as window dressing throughout the rest of the 1970s. Katia will try one last time, this time in America, where she will remain confined to the role of a seductive exotic curiosity in several television series such as ‘Chips’, ‘Knight Rider’ and ‘Trapper John, M.D.’ and ‘The Fall Guy’. In 1984, after a final episode of this series Katia Christine chooses to retire from her acting career.

Katia went back to school, studied finance and is today a successful businesswoman in real estate. As of 2000 she lives in Manhattan and owns several apartment buildings.