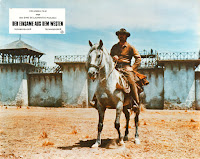 The huge fort with high gray walls and four towers at the corners, was built accordingly by a project by Enzo Eusepi for the film "A Man Called Sledge" (1970), produced by Dino De Laurentis, where it appears as a penitentiary (Rockville, Prison), "Blindman" (1971) and in the last part of “Hannie Caulder” (1971) where it was used briefly. In early 1973 it was dismantled and a few years later it was reconstructed on the ground where the large parking lot at the current Mini Hollywood/Oasys Park is now situated.