The forgotten history of the spaghetti western in Esplugas City

The documentary of Pere Marzo recovers the period of splendor in which the Balcázar Studios shot dozens of Western films. 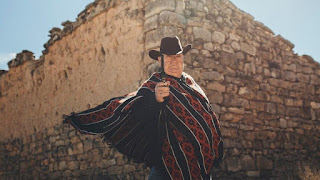 Alberto Gadea in an image from “Goodbye Ringo”

A man hums the song ‘Sabor a mí’ while driving on a lonely road. After a while he decides to stop the car and observe the wild landscape around him. Suddenly, the screen seems to look back to relive images of a western shot in the same place years ago. In that same moment, the man in the vehicle is assaulted by the soundtrack of the past and merges in an exchange of shots with some outlaws.

The start of “Goodbye Ringo” could not be more fun. The first long documentary by Pere Marzo (Barcelona, ​​1988) invites us to discover an exciting story that has fallen into oblivion, the one in which Esplugas City was the birthplace of the spaghetti western between 1964 and 1972. Nothing more and nothing less than some sixty feature films were produced by the extinct Balcázar Studios in that fictional town located in Esplugues de Llobregat, of which now there is only one sad palm tree as the only memory that remains standing and that welcomed the site. “Pistoleros de Arizona” (Gunmen from Arizona) was the first of a batch of tapes like “Crónica de un atraco” and “Le llamaban calamidad” that came out of that great set with an air of spirit of Hollywood. 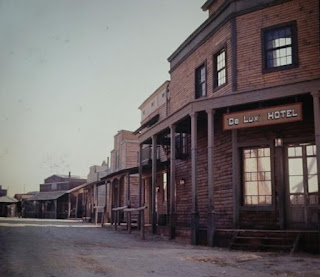 Fruitful cooperation between Spain and Italy flooded galloping cowboy theaters led by directors such as Duccio Tessari and Alberto di Martino and starred subgenre stars such as Fernando Sancho, Giuliano Gemma, Robert Woods, Van Heflin and Broderick Crowford. Although a young Klaus Kinki with his imperturbable face of evil doing his own paraded through the streets of that city with a West flavor.

The American far west settled in Esplugas City, on the outskirts of Barcelona, ​​just as it would happen in the desert landscapes of Almeria or in the Madrid town of Hoyo de Manzanares. Spain adopted as its own the classic genre par excellence of the United States. It was a time of splendor that infected the magic of the seventh art to many locals, who saw the opportunity to work in the industry and learn the trade at forced marches in the absence of the instructions of professionals. The films were made quickly and at a low cost.

Marzo nurtures his work with an agile montage that plays to relive chapters of the past through the testimonies of five protagonists. Among them, Alberto Gadea, stunt coordinator who shot more than 50 films in the town of the Catalan west in his youth. He dreamed of being an actor, but he had to make do with small roles and some wounds of someone who throws himself to the ground in full action without having properly calibrated the scope of the fall. Result: a broken wrist that did not prevent him from working the next day. The love for the western could do with everything. "Movies are made out of love, not money," recalls another character.

That air of nostalgia is very present in “Goodbye Ringo”. And it is that the western made in Spain left its mark and marked deeply the existence of many young people eager to live in their own flesh the entrails of a cinema that no longer exists. Gadea himself, Giorgio Capitani, Paco Marín, Romolo Guerrieri or Maurizio Amati remind us of a fascinating past in which good and evil looked at each other, bullets were intercrossed and revenge was felt. All this within the framework of an enclave dressed in hats, boots and pistols that lasts with force in the memory of these survivors, although not so much in the collective of our cinematography. 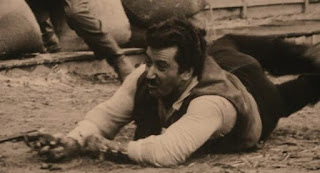 The documentary reflects on an era, a way of making films with respect, admiration and the longing for a time that deeply affected many people. In a way it is a tribute to those who participated in all of that dusty gear for almost a decade that ended up jumping through the air without a trap or cardboard by decree of the Franco regime in 1972. But the best thing is that the March camera gives the story a fine sense of humor that the viewer appreciates among so many mixed feelings and seasoned in the form of fragments of spaghetti westerns, photographs of the filming, news of the time and a voiceover that is basting the story slowly.

Goodbye Ringo, worthy of the public prize for the best documentary at the Sitges festival, opened March 19 in the Texas theaters in Barcelona and afterwards there was a subsequent talk. The work will be screened again in Texas on March 26 and April 2 at the same time and later will travel to Sant Feliu de Llobregat (Cinema Baix, 20h, April 5) and the Filmoteca de Zaragoza (2 and 3 of may).

“The film reflects on an era, a way of making films with respect, admiration and the longing for a time that deeply affected many people.”
Posted by Tom B. at 6:41 AM