New stars introduced themselves at Kalkberg

The famous Winnetou melody sounded - and a new chief of the Apaches rode into the Indian Village on the Kalkberg: Alexander Klaws (35) is the new leading actor of the Karl May Play at Bad Segeberg. At his side were the guest stars Larissa Marolt (26) and Raúl Richter (32).

For Larissa Marolt, who will feature actress Tiffany O'Toole's tailor-made role, there was a small women's gun: a deringer, which she will use to defend herself in the Wild West adventure, stowing it in her garter.

Raúl Richter embodies the title character: Martin Baumann, the bear hunter's son. He received from Ute Thienel an Indian knife, which will play an important role in the play. The young Westerner who is under suspicion of murder. Tiffany O'Toole is also starting a romance.

"Unter Geiern" will premiere on June 29, 2019 and will continue for 72 times until September 8th. 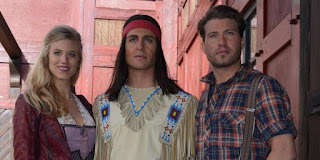