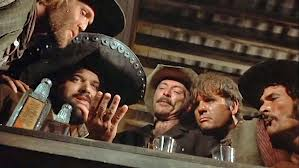 
Charles Fredrick Stalnaker was born on November 10, 1933 in Elkins, West Virginia. After graduating with a Liberal Arts degree from Oglethorpe University in Georgia, Charles went on to enjoy a fulfilling and fascinating career as a writer and actor in films. Stalnaker appeared in 18 films from an appearance in TV’s ‘Death Valley Days’ in 1957 until his final credit in the Spanish TV series ’Curro Jiménez’ in 1978. Among his film and TV appearances were seven Euro-westerns: “Custer of the West” (1967) “Guns of the Magnificent Seven” and “Shalako (both 1968), “El Condor” and “Land Raiders” (both 1969) and “Cannon for Cordoba” and “Captain Apache” (both 1970). Stalnaker returned to the U.S and lived in Flora, Illinois where he continued to write screenplays and short stories until his death from heart disease on August 2, 2012.
Posted by Tom B. at 6:36 AM