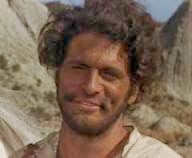 Musante acted in numerous feature films, in the United States and elsewhere, including Italy. Among his body of work are the television series ‘Toma’ (1973-1974) (predecessor to ‘Baretta’ with Robert Blake) and the soap opera ‘As The World Turns’, and the 1975 Broadway play, ‘P. S. Your Cat Is Dead!’, for which he was nominated for a Drama Desk Award. He was nominated for an Emmy Award for his work in a 1975 episode of ‘Medical Center, A Quality of Mercy’. Musante also played Antonio "Nino" Schibetta, a feared Mafia boss and the Italian gang leader inside of Emerald City during the first season of the HBO critically acclaimed television series ‘Oz’. He’s known by Spaghetti western fans for his portrayal of Paco Roman alongside Franco Nero in the 1968 film “The Mercenary”.