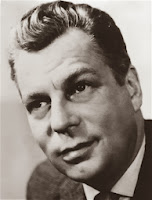 
He appeared more than 400 times in the 1960s and 1970s as Henry Higgins in "My Fair Lady" on stage at the Dresden State Operetta. Peter sang and acted and thus was remembered in the hearts of the audience. He has died at the age of 95 years on October 30, 2013 in Dresden, Germany.
Born on May 5, 1918 in Plön, Schleswig-Holstein, Germany, Herden first joined the State Theatre of Dresden in 1949. His last official performance was in 2000. He received an honorary membership in the National Opera in 2007.
Herden appeared as a Professor of Ophthalmology in the 1992 biographical film "Karl May".
Posted by Tom B. at 4:50 PM