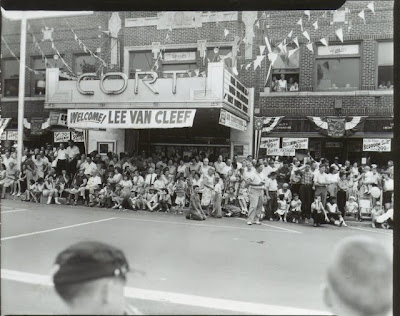 Tim Ferrante, founder of Westerns... All'Italiana!, sent me this rare photo of the The Cort Theater marquee in Somerville, New Jersey which welcomes a live appearance by Lee Van Cleef, their hometown hero, where a huge crowd awaits the town's homegrown Euro-western star.


The Cort Theater was located at 32 East Main Street, Somerville, New Jersey, but apparently the building has been redesigned into several smaller shops and no longer exists. Both Tim and I are unable to read the side of the marque to determine what film was being shown. If anyone can decifer what it says or knows what film was showing on this grand occassion please leave us a comment.
Posted by Tom B. at 5:48 AM