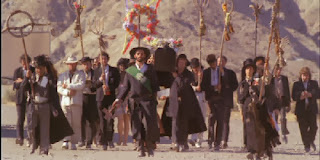 Three hitmen, Willy, Norwood, and Simms are staying in a posh Los Angeles hotel. After failing a job, they take off in a car with a whiny pregnant woman named Velma, who is in on their scheme. They then flee to Mexico to escape the wrath of their boss, Amos Dade, and rob a bank along the way. While driving through the desert, their car breaks down due to Simms having filled the gasoline tank with diesel by mistake. They bury their suitcase of money in the desert and begin to walk.

Night falls, and they come upon a town in the middle of the desert, where they see a demolished car with a corpse inside. They then enter an empty bar, where the three men get drunk and Velma angrily pesters them to leave. As they exit the bar, the wrecked car has vanished, but the men are too inebriated to notice it. The group camps out for the night, and the following morning, Velma witnesses several trucks of lively cowboys enter the town, carrying espresso machines with them. Much to the dismay of Velma, who insists they keep a low profile and leave, the three men enter the town, which is now full of townspeople, and go back to the bar.

There, they are confronted by a gang of cowboys addicted to coffee, and a shoot-out ensues, but they are ultimately welcomed by the townspeople. The bizarre townspeople include a couple who own a mercantile full of piñatas, a man running a hot dog stand, and countless cowboys and prostitutes, among others. The head honcho of the town, Tim McMahon, invites the gang to a party that evening. The following day, Tim McMahon's elderly father is pushed off of a building by his relative Sabrina McMahon and dies. The entire town has a funeral procession for him, and at the funeral, a friend of Amos', named Whitey, shows up looking for the hitmen and Velma.

The town seizes Whitey for being a "stranger", and accuses him of the murder of the McMahon grandfather. During the burial of the grandfather, his hand comes up out of the dirt and grabs the priest's ankle, and the priest shoots into the ground, killing him. Meanwhile, on the gallows, Whitey begins to tell the town the truth about Amos and the hitmen, but is hanged before he can tell his story. A man named I.G. Farben, who claims to be a house manufacturer, enters town with his wife Sonya and introduces himself to the gang and the rest of the townspeople, advertising his company. The next morning, Simms sees Amos' car enter the town, and tries to get a drunken Willy and Norwood to leave with Velma.

A series of shootouts begin between the townspeople, Amos' crew, and the hitmen, and I.G. Farben and Sonya provide high-grade weapons for the killers. Tim McMahon joins Amos' team after having wrongfully hanged Whitey, and everyone begins to turn against each other. As Simms and Willy run into the desert, a shootout ensues with the town priest. They reach the spot where they buried the money, and Simms shoots Willy as they are trying to lift the suitcase out of the ground. Simms then hears Velma laughing, and turns around only to be shot by Velma and one of the townsmen. After Velma shoots Simms several times, the townsman with her is shot by Tim McMahon. Tim and Velma then take off arm-in-arm with the suitcase of money, while Simms and Willy die.

Meanwhile in town, chaos has ensued, and the town hardware store is set on fire. Amos is shot in the head, and virtually everyone in the town is killed, aside from Norwood and several prostitutes. Tim and Velma leave the town in a truck with the suitcase of money, but accidentally drive off of a cliff when their brakes go out, and die as the car explodes in mid-air. Norwood leaves town with the prostitutes, and the film ends with Farben Oil Company trucks entering the town to drill for oil.