Who Are Those Gals - Marina Berti 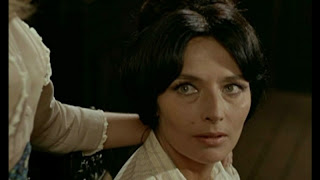 Elena Maureen Bertolini, known as Marina Berti, was born on September 29, 1924 in London, England.  The daughter of an Italian who emigrated to England at the end of the 1930s. Marina came to Italy, and settled in Florence in order to complete her studies. Passionate about acting, she participated in several theater shows before debuting in the studios of Radio EIAR Florence.

In 1940 the young Berti moved to Rome to enter the world of cinema, she was noticed by the director Piero Ballerini, and made her debut in front of the camera in the film “La Fuggitiva” (1941), in a minor part. In 1943 she made her debut as an effective lead in “Giacomo l'idealista” directed by Alberto Lattuada.

Endowed with great beauty and a communicative intensity the actress appeared in such films as: “Febbre di vivere” (1953), directed by her husband, Claudio Gora (aka Emilio Giordana), and “Un eroe del nostro tempo” (1960) by Sergio Capogna, a film about the Resistance. She also participated in important international productions, especially big Hollywood blockbusters, such as “Ben-Hur” (1959) by William Wyler and “Cleopatra” (1963) by Joseph L. Mankiewicz.