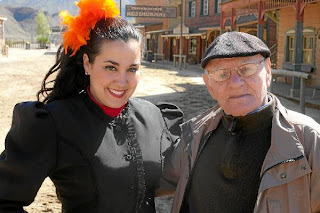 Kent Wilson has returned to the West. The author of dozens of Western novels that were all the rage in the fifties, or rather, the man hiding behind this pseudonym, Angel Cazorla, has returned to the scene imagined in his works that he wrote as 'Kent Wilson, in a documentary directed by José Carlos Castaño for Terque Ethnographic Museum.

The film delves into the figure of the writer, born in Santa Cruz de Marchena in 1930. It was filmed this April between Terrassa - where he now lives - his hometown and the town of Mini Hollywood in Tabernas Oasys Park, 'I’m called Kent Wilson' pays tribute to the author, owner of a rich personal history and extensive literary career.

Cazorla, parraleros humble son, left school at fourteen and, like so many Almerians, emigrated to Terrassa. There at twenty-two he began writing popular novels under the name of Kent Wilson. He wrote more than a hundred detective stories, war, science fiction, romantic and above all westerns. Scorned by critics, these novels, sold and exchanged in kiosks, were all the rage in Spain at the time.

But Angel Cazorla kept another bullet in the chamber. In 1957 he moved to Belgium as a bricklayer and attending evening classes received a Ph.D. in English and French. Here, under his real name, wrote in 1959, 'El pan y la tierra’, published in 1974. Considered one of the best novels ever on Almeria, it reflected the hard and austere life of a family of parraleros through a brilliant description of parallel stories and characters. "With it I went to the Planet and was eighth among 293 candidates, just behind Paco Umbral" he recalled in 2010 in an interview with this newspaper la Voz de Almeria