Who Are Those Guys? - Aldo Berti 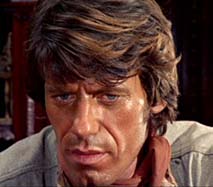 Aldo lived a nomadic life traveling all over the world after giving up his film career. Aldo was living life with no cares and a mind like a sponge soaking up everything he could see and hear. He was friends with William Berger, had a romantic relationship with actress Barbara Steele after which he almost committed suicide. Berti was friends with Sarah Churchill, became a poet and wrote a book of poems entitled ‘Canto Finale’.

On February 14, 1984 while traveling up the Nile with a load of patients for Juba and the first Doctors Without Borders they were attacked by armed men with machine guns, grenades and burned. Hundreds died and Aldo’s spirit died with them. From that point on he lived a personal life of shame for not dying with them.

For many years he lived a simple life in Morocco. He was diagnosed with brain cancer in October of this year and returned to Florence to face death. One of the most recognized Italian character actors left us on December 26, 2010. His motto was "To be born is the privilege of all, having lived a privileged few."