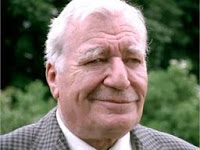 Arthur Nigel Davenport was born on May 23, 1928 in Shelford, Cambridge, Cambridgeshire, England, U.K , but has always gone by the name of Nigel. Davenport's father was a bursar at Sidney Sussex College, Cambridge. He grew up in an academic family and was educated at St Peter's School, Seaford, Cheltenham College and Trinity College, Oxford. Originally he chose to study Philosophy, Politics and Economics but switched to English on the advice of his tutors.

Davenport first appeared on stage at the Savoy Theatre and then with the Shakespeare Memorial Company, before joining the English Stage Company at the Royal Court Theatre in the 1960s. He began appearing in British film and television productions in supporting roles, including a walk-on in Tony Richardson's film, “Look Back in Anger” (1959). Subsequent roles included a theatre manager opposite Laurence Olivier in the film version of “The Entertainer” and a policeman in Michael Powell's “Peeping Tom” (both 1960).

He made an impression as Thomas Howard, 3rd Duke of Norfolk in “A Man for All Seasons” (1966) and had a major role of Lord Bothwell in “Mary, Queen of Scots”. In 1972, he appeared as George Adamson, opposite Susan Hampshire in “Living Free”, the sequel to “Born Free”. Davenport took the leading role in the off-beat Phase IV, which failed to find an audience. Since then he has continued to work in supporting roles in film and television as a succession of lords, police inspectors, and military officers with a twinkle in his eye, most characteristically as General Lord Ismay opposite Nicol Williamson's Lord Mountbatten of Burma in “The Last Viceroy”, a classic TV drama series that aired in 1986. In the 1974 BBC production of Shaw's "Apple Cart", he excelled as King Magnus, with Prunella Scales and a young Helen Mirren in supporting roles. Nigel appeared in two Euro-westerns: “Charley One-Eye” (1972) as the bounty hunter and “Return of El Coyote” (1997) as Don César Félix de Echagüe.

In February 1997, Davenport was the subject of ‘This Is Your Life’ when he was surprised by Michael Aspel at David Nicholson's stables near Cheltenham.

Davenport retired from acting at the turn of the 21st century when he could no longer memorize lines from scripts.