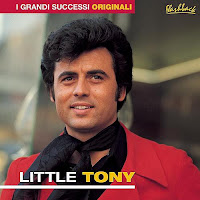 Italian singer Little Tony died today in a Rome clinic suffering from bone cancer. He was 72.  Born Antonio Ciacci on February 7, 1941 he was known as the Italian Elvis. A pop singer and actor. He achieved success in Britain in the late 1950s and early 1960s, as the lead singer of Little Tony & His Brothers, before returning to Italy where he continued a successful career as a singer and film actor.

The group first revisited Italy in 1961 to appear at the San Remo Festival, returning more permanently the following year. Little Tony then worked as a solo singer, having his first #1 in Italy with "Il ragazzo col ciuffo" in 1962. He also began working as a movie actor, notably appearing in “5 marines per 100 ragazze” in 1962. In all, he appeared in over 20 movies in Italy. He also continued to record regularly through the 1960s, one of his biggest hits being "Cuore matto", reaching #1 for nine consecutive weeks in 1967. It sold in excess of a million copies and was awarded a gold disc in May 1967.

Tony formed his own record label, Little Records, in 1969 and continued to record and perform successfully in Italy, despite suffering a heart attack in 2006. He recorded the title song “Rainbow... vorrei... vorrei” for the 1968 Euro-western “The Longest Hunt” with Brian Kelly and Keenan Wynn.