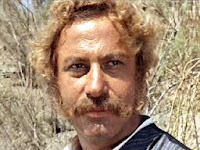 Walter Frank Hermann Wolff was born on May 11, 1928 in San Francisco, California. He was a versatile American actor whose prolific movie career began with roles in five 1958-61 Roger Corman productions and ended a decade later in Rome, after scores of appearances in European-made films, most of which were lensed in Italy.

Frank attended UCLA, where he studied acting and stagecraft, wrote and directed plays and befriended another actor/director, Monte Hellman. Between 1957 and 1961, he appeared in nearly twenty episodes of TV series and feature films, a few of which fit into the horror/science fiction genre.

In the autumn of 1960, Wolff traveled to Greece to co-star in another Roger Corman-directed, Charles B. Griffith-scripted low-budgeter, “Atlas” (1961). The title role was again assigned to the brawny Corman regular, Michael Forest, while the female lead went to Barboura Morris. Wolff was cast as the treacherous King Praximedes, a scene-stealing lead villain who was singled out by the few critics who reviewed the film.

On Corman's advice, Frank Wolff remained in Europe and became a well-known character actor in over fifty, mostly Italian-made, films of the 1960s, including crime/suspense "gialli" and spaghetti westerns. Early in his European career, he returned to Greece to essay a major, second-billed role in his most prestigious movie, the 1963 "Best Picture" Oscar nominee “America, America”, which producer-director-writer Elia Kazan filmed on location.

Frank appeared in 10 Euro-westerns from “A Stranger in Town” (1967) to “Sartana The Gravedigger”. Frank also made a documentary film on the Euro-western called “Western, Italian Style” in 1968.

Despondent over losing the love of a woman Frank  killed himself in his Rome hotel room at the age of 43 on December 12, 1971.

Today we remember one of the great actors of the Spaghetti western genre, Frank Wolff on what would have been his 85th birthday.
Posted by Tom B. at 5:50 AM