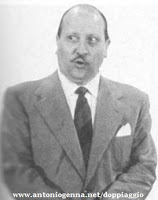 Carlo Romano was born in Livorno, Tuscany, Italy on May 8, 1908. The son of actress Dina Romano [1888-1957] and the older brother of actor Felice Roman [1904-1956], grandfather of voice actors Andrea, Monica and Luke Ward, debuted at the Teatro Minimo of Trieste at the age of five. In 1929 he entered the Society Talli-Capodaglio and because of his young age, and for his style, he played on the kindness and sympathy of the theatrical personnel. He was given the nickname Carletto by which he was long remembered.

He became much more relevant and famous as a voice actor, in which Romano excelled lending his voice to countless actors, not only foreigners, but also Italians, enriching nuances of caricature and, if necessary, dialect for many film personalities of the 1930-1960s such as Jerry Lewis, Lou Costello, Bob Hope, Nigel Bruce and Jack Carson.

Romano’s career also included many appearances and narrations on Italian radio and television from the 1940s – 1970s before he died on October 16, 1975 in Rome, Italy.

Today we remember Carlo Romano on what would have been his 115th birthday.