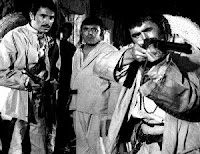 Another legendary Croatian actor has died, the popular Domenico from 'Našeg malog mista' (‘Our Little Place’).

This  past Tuesday in Zagreb died the Croatian theater, film and television actor Mato Ergović. Ergović was born on January 11, 1927 in New Mikanovci near Vinkovci, Croatia. He started acting at the City Theatre in Vinkovci, and his entire working life was spent in the theater Gavella. He also played numerous roles in film, TV and theater.

His first role was in 'Opsada' in 1956. Over the years, he has appeared in some sixty films including 'Pera Kvrzica', ''U gori raste zelen bor', 'Sokol ga nije volio', 'Maršal' i 'Duga mračna noć'. He has appeared in fifteen Croatian TV series, and will be especially remembered for his role as Domenica in 'Našem malom mistu', Pučanstva u 'Velom mistu' i Kanonika u 'U registraturi'.

In his only Euro-wester Mato appeared as Diego in “The Taste of Vengeance” (1961) with Robert Hossein. [Mato is seen in the center in the above picture]