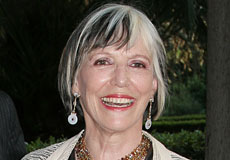 Victoria started her career at a young age appearing in, Luis Buñuel’s “Viridiana, 1961”, before moving to Italy. Soon she was called upon by the Italian directors as a skilled actress of genre cinema. She’s gone on to appear in over 50 films and TV appearances. Among her films were two Euro-westerns: "Shoot the Living and Pray for the Dead" (1971) as Eleanor and “Keoma” (1975) where she played the brothel owner. In 2007 she joined for the first time professionally with her husband, in the dramatic “Black Sun” directed by Krzysztof Zanussi. Her latest film is “Roche papier ciseaux” (2013).

Today we celelbrate Victoria Zinny’s 70th birthday.
Posted by Tom B. at 5:35 AM