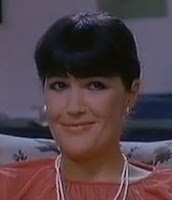 Francesca Romana Coluzzi Bartoccioni was born on May 20, 1943 in Tirana, Albania. The daughter of an epidemiologist Alberto Umbrian Coluzzi, and Anna Wimmer, German educator of Passau. She was born in Albania, because her father had been sent to carry out research and the fight against malaria by the Institute of malariology Ettore Marchiafava, during the period of Italian occupation. The family returned to Perugia, then moved to the district Monticelli, Italy

From an early age she became interested in art from music, poetry, painting. Equipped with a powerful physique and athleticism, during her university studies she made contact with the world of cinema thanks to her cousin stuntman Biagio Gambini, working there occasionally as a stuntwoman, and doubling actresses like Mylène Demongeot in the Fantomas films during the 1970s and Marisa Mell in the film “Diabolik” (1968). She was also the stunt double for Gastone Moschin for underwater filming of the movie “Il grande colpo dei sette uomini d'oro”.

At the same time she also played in small roles for director Lucio Fulci and was contacted by Federico Fellini for a major part in the film “8 ½” (1963), to which she decided to give up to continue her studies. However, in 1967 she agreed to play the role of Asmara in the film “Serafino” directed by of Pietro Germi, which became very popular.

The film with Germi was a turning point in her life and made her decide to abandon her studies and devote herself entirely to the commitment of film. Despite her success as an actress, she devoted herself first to scenery designing and creating the interiors for films “The Untouchables” staged by Giuliano Montaldo, “The Nun” by Monza Eriprando Visconti,“The Prophet” by Dino Risi. During the 1970s Francesca appeared in two Euro-westerns: “Sting of the West” (1972) as Betty Brown and “Karate, Fists and Beans” (1973) as ‘Baby’ Morgan.

In the 1980s, after the birth of her two daughters Laila and Swabian she cut back on her film appearances. She founded in Rome a theater workshop Minestrone, then renamed Cultural Association Minestrone Art which became an acting school run by Coluzzi until her death from lung cancer on July 15, 2009.

Today we remember Francesca Romana Coluzzi on what would have been her 70th birthday.