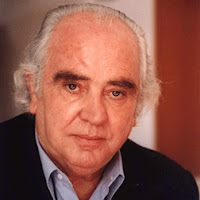 In 1966, he composed the soundtrack for the Euro-western “Texas Adios”, starring Franco Nero. In 1969, he worked with director Rafael Romero Marchent, on the sound track of the movie “When Satan Grips the Colt”, another spaghetti western. In all Abril composed scores for five Euro-westerns. He also composed the music for Amando de Ossorio's “Blind Dead” film series.