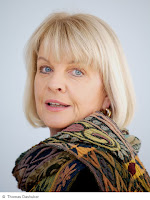 Gisela Drenkhan was born on May 13, 1943 in Briesen, Brandenburg, Germany. Due to the fate of her refugee parents, she came to Hamburg when she was two years old and grew up in Visselhoevede. After high school, she completed an apprenticeship with Siemens and drew attention to herself as a bowling champion. She then moved to Munich in 1963. There, she was assisted with finances to take private acting and singing lessons. Shortly after, she had her first stage appearances under the stage name "Gisela Hahn".

Her natural beauty was noted and from 1964 she worked in numerous feature films. Gisela was also seen in German television series, before settling in Rome in 1970 and then acted mostly in Italian productions. She was cast in mainly thrillers, westerns and adventure films. In December 1976, images of her in the Italian edition of the magazine Playboy were published. In 1983 she returned to Germany, where she became head of film distribution at Cinevox. She also appeared occasionally in television roles.