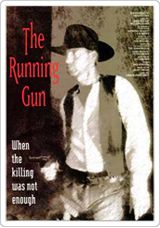 A gunfighter drifts into a small Arizona town offering his gun for hire he finds what life is all about and that his has been wasted.